The Australian Defense Force has had a busy few years on the home front, responding to help after the Black Summer bushfires, assisting with pandemic relief efforts and most recently helping clean up after floods have devastated parts of the east coast of Australia in the past two months.

Yet concerns continue to be raised about the speed and effectiveness of the response in coordination with other disaster agencies. In early March, New South Wales Premier Dominic Perrotett acknowledged that the emergency flood response had not been good enough after hundreds of people were left without food, water and fuel, and many were stranded on rooftops waiting to be evacuated. On March 14, the commissioner of the NSW State Emergency Service (SES) was forced to comment on a controversial decision to twice reject ADF aid, days before the deadly floods began.

There are now more than 3,000 ADF personnel and resources on the ground in northern New South Wales to help with flood relief as of March 30.

It’s obvious that governments call on the military to help in a crisis, but as many have wondered recently, what is the optimal response? A new book by a Sydney-based retired Indian Army general aims to tackle these issues head-on.

Major General Amardeep Bhardwaj, PhD (Retired) explained, “Throughout history, militaries around the world have been at the forefront of disaster response; saving lives, rescuing and delivering aid. The military is a country’s greatest resource, with better logistics, manpower, and courage than any other agency, to deal with disasters. Considering that most militaries are often not engaged in warfare, they have vast scope to play a larger and more meaningful role in disaster response.

Many Indians are familiar with the military’s long history of helping in times of crisis, outlined in the Disaster Management Act passed in 2005. Here in Australia, however, it’s not that simple. The ADF’s involvement in disaster response dates back to the Hobart fires of 1967, but as the Royal Commission on National Disaster Arrangements recently noted after the 2019-2020 bushfires, it There is a lack of understanding of the ADF role, capacity and capacity in relation to natural disasters.

Over the past few weeks, many of us have seen images of flood relief efforts on the ground, including ADF personnel clearing property from flooded homes. The author points out that cases like this, when given adequate coverage in the media, grab people’s attention, raising pertinent questions about the effectiveness and timeliness of response to disasters. disaster.

“When I saw the graphics of soldiers in Lismore, helping to carry items like clothes and mattresses out of homes, I couldn’t help but wonder if this was the best way to employ the army,” he said. “That’s why I favor a ‘competency-based approach’ in assigning tasks to various agencies, including the military, during disaster operations. My book posits proper definition of roles, assignment of tasks, training, equipping and organizing an army – and this applies to all armies in the world – for more effective disaster response.

In Disaster Management: Optimizing the Global Military Response, published by Partridge Publishers, a Penguin-Random House company, readers can expect to find various chapters focusing on one major aspect of the military’s role in disaster management. A review of the latest disaster trends, how to leverage technology, and wisdom drawn from the United Nations as well as other countries, adds completeness and flavor to the book.

“There needs to be a systemic review and, if necessary, an overhaul rather than knee-jerk reactions during crises,” said General Amardeep. “The hidden truth is that the military is not optimally trained, equipped, organized or mandated to undertake such specialized humanitarian tasks. They are, in fact, optimized for combat. But when not engaged in their primary combat role, they have enormous leeway to accrue much higher “peace dividends” by serving humanity. »

READ ALSO: On Chint Singh, a WWII POW Rescued by the Australian Army

The book combines Major General Bhardwaj’s 40 years of professional experience in the military, including disaster/emergency operations, planning, policy development and advocacy, and more than one decade of focused research in the field.

His army career started immediately at the age of 17 when he joined training at the National Defense Academy (NDA) in Pune for three years followed by a year at the Military Academy India (IMA) in Dehradun.

“Early in my career, I was placed on an emergency management committee,” he recalls. “When I asked what that meant, I was told it was a pre-made team in the military to be ready and provide disaster and emergency assistance.”

Fast forward a few years and he found himself among an emergency response team flying MI-17 helicopters in fierce weather conditions in the Himalayan highlands of Himachal Pradesh, where in July 2000 locals described “a 100ft high wall of water” exploding across the Baspa River valley at midnight, destroying everything in its path, especially the villages around Karcham.

“I still remember the terrible weather and how dangerous it was for any aircraft, even army helicopters. No one in their right mind would go into that storm, but we did it,” he said. “At the time, I turned to my superior and asked him: ‘How long do we have to stay here?’ He told me, without a moment’s hesitation, “as long as it takes”. 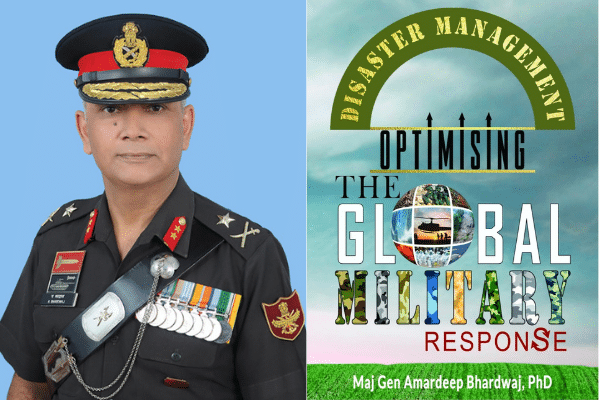 Over the years, he has played a role in various disaster responses by the Indian Army, being involved in field operations as well as managing them at higher headquarters. He still remembers his experience of man-made disasters, having served as a UN peacekeeper in Angola in 1997.

“AIDS and other diseases were rampant while warring factions fought relentlessly with military weapons and laid numerous mines. Life expectancy was short, it was hard to find a local who could survive to 60 and have gray hair! It was a solemn reminder of how devastating disasters, man-made or natural, can be,” he shared with indian link.

After this experience, he decided to supplement his practical knowledge in the field with a certificate in disaster management, becoming perhaps one of the first Indian military officers to do so.

In 2012, Major General Bhardwaj successfully defended his dissertation on “Indian Army’s Role in Disaster Management” to earn his PhD in Defense Studies (Specialization in Disaster Management) from Chaudhary University Charan Singh, Meerut. His supervisor was Dr. Harvir Sharma, an esteemed Indian scholar and perhaps the only D.Litt in the field.

“After my doctorate, I started to ask myself: what about other countries? I then began to study how the militaries of China, the United States, Australia, Japan and many others have engaged in disaster response; also how various UN bodies and some of the global NGOs have been involved in disaster management. Two achievements emerged; firstly, it seemed that there were identical problems in almost all armies, and secondly, couldn’t the solutions be the same or at least similar? »

Inspired to examine the issue on a global scale, his book Disaster Management: Optimizing the Global Military Response was born.

“This book is particularly relevant to military, paramilitary, civil defence, police and other emergency services, regardless of country or nationality. It offers valuable information to policy makers, practitioners, students and stakeholders in the field of disaster management, everywhere,” noted Major General Bhardwaj. (He adds that he contacted the offices of the Australian Federal Ministers of Defense and Emergency Management, National Recovery and Resilience to provide his ideas, but received no response from them.)

Advocacy for climate action and sustainability

As the federal election approaches, he has a crucial message for Australian voters.

“The Australian voter deserves to know exactly where a political party stands on vital disaster issues including climate change, deforestation, pollution, biofuels and sustainable development. Sometimes you hear here and there general remarks about a strange problem, but that’s not good; the constituent needs clarity on action plans, timelines, budget support and measurable results. The devil is in the details, but that’s what helps the voter decide who to vote for.

“We have tinkered with mother nature a bit too much and now all of humanity’s resources are woefully insufficient. There is a capacity gap that continues to widen, ”underlines the general.

“Disaster trends are unambiguous that in the future, the frequency and ferocity of disasters will increase dramatically. But governments around the world are business as usual. This growing threat requires urgent and exponential scaling, and it is here that the idea of ​​giving the world’s militaries a greater role in disaster response can save the life of planet Earth.

As a specialist in disaster management, he is well aware of how human actions, however harmless, can affect our natural environment.

“Ancient cultures around the world, including in India and Australia, have fantastic wisdom about how to properly interact with and respect nature. I think it’s important to preserve this knowledge. One of the Ways to move forward is actually to go back to preserve and use this ancient wisdom,” says General Bhardwaj.

APC Convention: Do not put me in contact with any candidate

From Gyang Bere, Jos The Chief Executive of the Industrial Training Fund (ITF), Sir Joseph Ari, has sounded the alarm over fake campaign posters printed by troublemakers to express his support for Senator Umoru Tanko Almakura and the Deputy Governor of Plateau State, Professor Sonni Tyoden. ahead of the All Progressives Congress (APC) National Convention […]

Today, a new Coin Master rewards link went live to help players get their weekend off to a good start. The game has one of the largest user communities, as well as participatory aspects such as donations and raids. Users who redeem free spins by clicking the Twitter link will receive a minimum of twenty-five […]

This global Managed Switch Sales The market report reviews the ongoing developments in the market and significant cases from previous years. It provides key highlights of the industry’s achievements in managed switch sales in previous years. The report focuses on providing a solid return on the investments made by market players and shows concrete ways […]