At a border crossing with Poland, Ramunas Serpatauskas waved cars crammed with bags, blankets and often three generations of family members on a recent evening.

Commander of the Union of Lithuanian Riflemen, a civilian paramilitary organization, Serpatauskas was there to help refugees who had fled the war in Ukraine.

But the checkpoint, one of only two in a narrow 64 kilometer corridor as the crow flies between Russia’s Kaliningrad territory in the north and the Belarusian border in the south, is strategically important for another reason.

If Russia attacked, it would probably be here, Serpatauskas said. “Let the Russians try,” he added defiantly, “We’ll show them.” 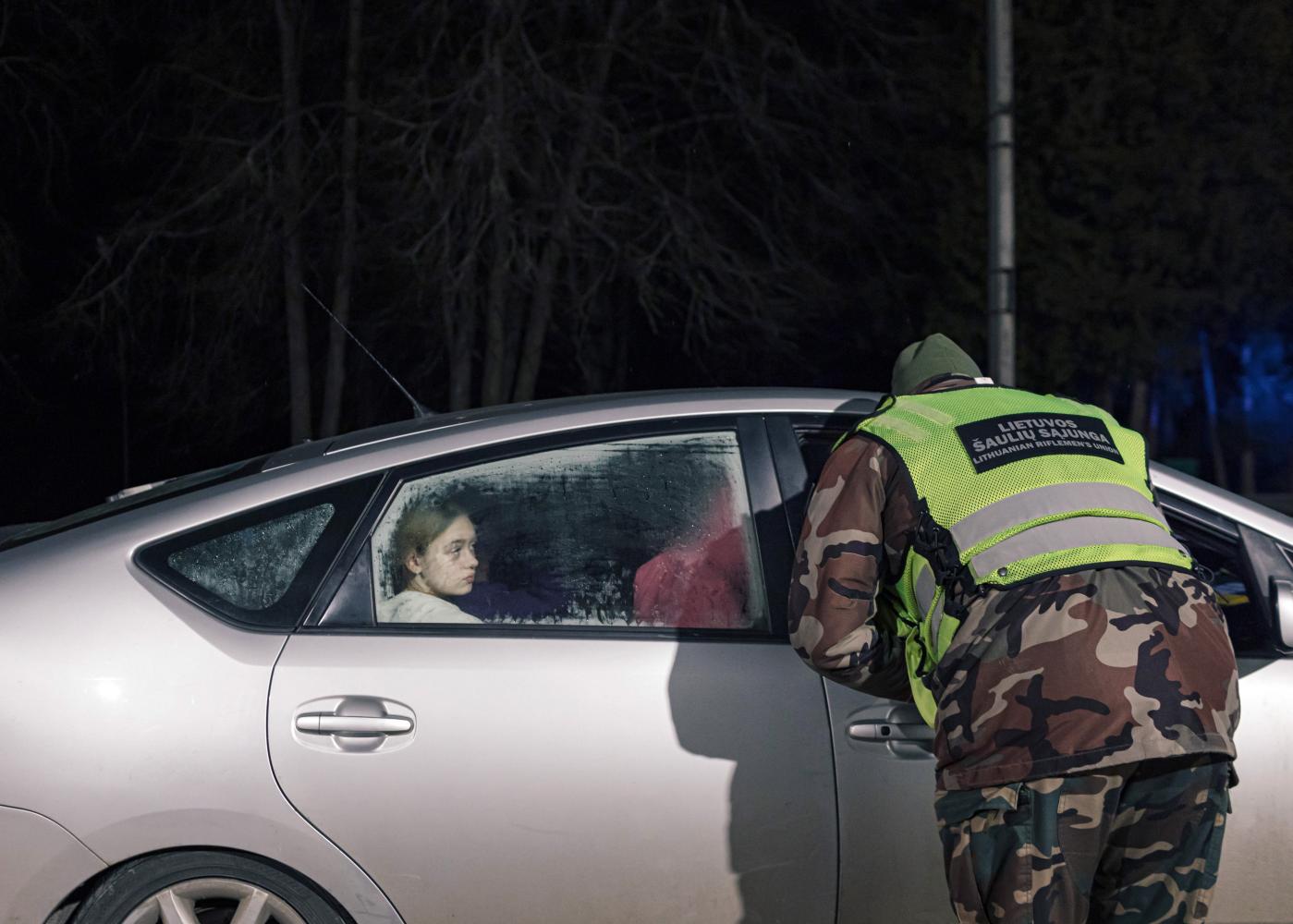 Ramunas Serpatauskas, a commander of the Lithuanian Rifle Union, addresses Ukrainians arriving at the border crossing from Poland in Lazdijai, Lithuania. ANDRE MANTOVANI

The mood is tense in Lithuania, one of three small Baltic states and NATO members that spent half of the 20th century under Soviet rule. Everyone here heard Ukrainian President Volodymyr Zelensky’s recent warning: “If we are no more, God forbid, Latvia, Lithuania and Estonia will be next.”

Many Lithuanians fear that if Russian President Vladimir Putin wants to test NATO’s resolve, the Baltics would be a starting point: an enclave of freedom whose only connection to other NATO allies is the 64 km that Mr. Serpatauskas was patrolling, the Suwalki Gap. It is widely regarded as one of NATO’s greatest vulnerabilities. 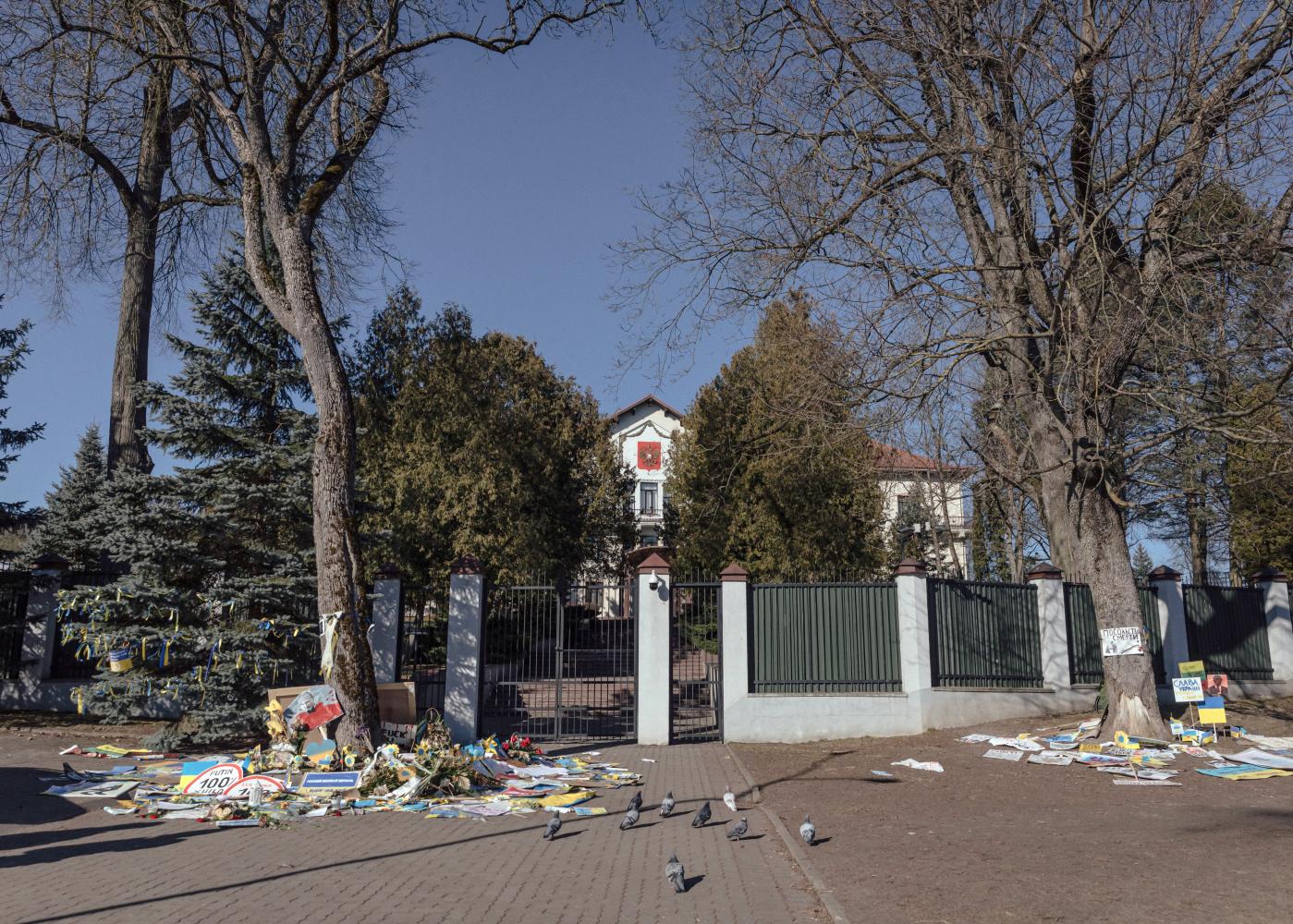 Placards protesting the invasion of Ukraine are placed outside the Russian Embassy in Vilnius, Lithuania. photos: ANDREA MANTOVANI/nyt

“It’s an obvious strategic target for the Russians because you can cut us off from NATO’s security system,” said Laurynas Kasciunas, chair of the national security and defense committee in the Lithuanian parliament. “We are sort of a modern West Berlin.”

The analogy of West Berlin, an outpost of Western democracy surrounded by Soviet-controlled communist Germany during the Cold War, has become popular. Many still hope that despite missiles and tactical nukes pointed at them from Kaliningrad and tens of thousands of Russian troops deployed in neighboring Belarus in recent months, Moscow won’t dare to invade — and risk war with Russia. NATO and the United States.

Lithuanian and NATO military commanders say that with Russian ground forces pinned down in Ukraine and struggling more than expected, for now at least, an attack is unlikely.

But no one says it’s impossible anymore.

“We are not panicking, but we have to be ready,” Mr Kasciunas said. “Every family should have a plan.”

His wife started storing food (and scolded him for eating one of the cans the night before) and they planned to have their children evacuated to the countryside in case of an attack. 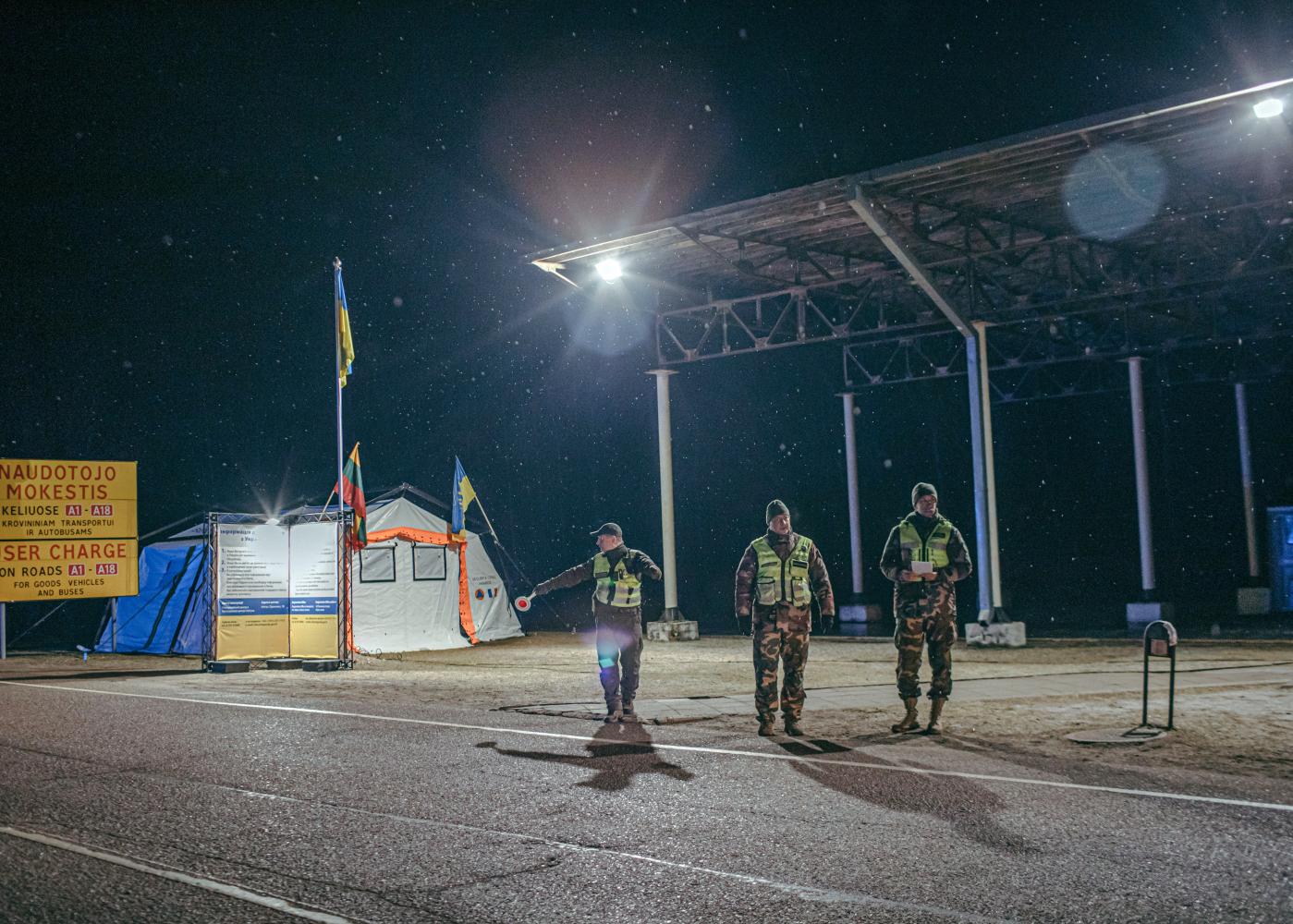 Members of the Druskininkai Company of the Lithuanian Rifle Union, a paramilitary organization, monitor Ukrainian vehicles at the border crossing between Poland and Lazdijai, Lithuania. ANDRE MANTOVANI

The day Russia attacked Ukraine, the Lithuanian government declared a state of emergency. Lists of schools and churches whose basements can be used as air-raid shelters have been published. Recently, a military exercise was held on the Suwalki Gap, and some 4,000 NATO troops were scheduled to hold another exercise.

“Thank God we are part of NATO,” said Arunas Bubnys, director of the Lithuanian Center for Genocide and Resistance Research. “If we weren’t members of NATO, the situation would be very dangerous.

NATO has had a permanent presence in all the Baltic states since 2017, multinational battle groups which were deployed in response to Russia’s first invasion of Ukraine three years earlier and are intended to deter Russian aggression. But since the outbreak of war last month, the alliance has shifted from deterrence to activating its defense plans.

Colonel Peter Nielsen is the Danish Commander of the NATO Force Integration Unit in Lithuania, which coordinates between the local military command and some 3,000 NATO troops currently in the country.

For now, he said, “no one sees a buildup along the border; on the contrary, troops and equipment have been flowing into Ukraine.”

But, added Colonel Nielsen, NATO is not taking any risks, especially since about 5% of the Lithuanian population is of Russian ethnic origin. In Estonia and Latvia, this share is 26% and 34% respectively, higher than in Ukraine.

“The geography of the Suwalki Corridor is real,” he said, running his finger over a large map hanging on the wall of his office. “If they were to make an incursion into the Baltic countries under the pretext of protecting their Russian minorities, then NATO is involved – and we are at war with Russia.”

“We are reviewing and refining our plans,” he said. “We are moving to prepare to defend.”

The same is true for many Lithuanians. Gun sales in the country have surged. Ranges are reserved for target practice and the Riflemen’s Union has seen its membership grow by more than 2,000 in recent weeks. Canned sardines and gasoline fly off the shelves.

Alina Puriene, a respected dentistry professor, orders sandbags to seal her basement windows. She lobbies her university to train doctors of all specialties in surgical skills and traumatic injuries.

“We have to be ready,” Prof Puriene said, standing in his elegant townhouse in the center of Vilnius, the Lithuanian capital. Colonel Peter Nielsen, right, the Danish commander of the NATO Force Integration Unit in Lithuania, consults a map of the Baltic States in Vilnius. ANDRE MANTOVANI

Lithuania, which was occupied by the Russians, Germans, Swedes and even the Ottomans over the past centuries, has proven its fighting spirit more than once. When the Soviets retook occupation of the country from the Nazis at the end of World War II, a fierce rebellion of freedom fighters held out for eight years in the country’s southern forests. In 1990, Lithuania was the first Soviet republic to declare its independence, a signal that angered Moscow, which tried – but failed – to stop it with tanks.

In mid-March, as the country marked 32 years of independence, the celebrations had a special meaning. In the streets of Vilnius, there were almost as many Ukrainian flags as Lithuanian ones. In towns and villages across the country, there were so many civilians sworn to the paramilitary Rifle Union that they lacked uniforms.

“Freedom is fragile,” said Kasciunas, who went to spend Independence Day with soldiers in western Ukraine. “The Ukrainians are fighting for us and for Europe too,” he said. “By resisting, they are depleting Russia’s military resources. We must use this time to mobilize for all future scenarios.”

Signs of mobilization were everywhere, big and small.

Recently, in a village square in the Kaisiadorys region of central Lithuania, the mechanized infantry battalion Duke Vaidotas conducted a camouflage exercise near a primary school. During their break, a group of first-graders enthusiastically gathered around a float. A soldier handed his G36 assault rifle to a boy who weighed it in his hands.

“Our children know there is a war,” said Odilija Juzukoniene, one of their teachers. That morning, two children had asked to learn a Ukrainian song in music class, out of solidarity. “For us in Lithuania, this war is personal.”

On social media and elsewhere, Lithuanians bombarded their government with variations of the same question: “Will we be next?”

In the town of Druskininkai near the Belarusian border, residents were spooked by the sound of nearby gunfire, prompting some to call town officials to ask, “Has the war started?” They had to be reassured that the Belarusian troops were organizing an exercise on the other side of the border.

But in the opinion of General Jonas Vytautas Zukas, who until 2019 was the commander-in-chief of the Lithuanian army, “World War III has already begun. It’s like in 1939, when Hitler attacked Poland and no one believed it would lead to a world war.” , he said.

This is what worries Ms. Puriene, professor of dentistry in Vilnius. At 66, she’s old enough to remember Soviet oppression – how she and her husband had to secretly marry in a church because church services were banned, her mother’s stories about a friend who were killed in the anti-Soviet resistance, families who were deported to Siberia.

“Western Europeans don’t understand Putin,” she said. “They’ve been living in a ‘post-war’ mentality since 1945. What we need is more of a ‘pre-war’ mentality.” She remembers practicing target practice in school as a teenager and learning everything from chemical weapons to surgery, even though she had studied dentistry.

“In Soviet times, all doctors were prepared as war surgeons,” Professor Puriene said. “I knew how to put on a chemical protection mask and how to deal with a traumatic brain injury. Nowadays, dentists know how to take care of teeth.”

At the NATO command, Colonel Nielsen said he had been touched by the foresight of the Lithuanians since his posting here last summer. Since Russia’s war with Georgia in 2008, Baltic leaders had warned of Moscow’s imperial ambitions, but too often their perception of the threat had been dismissed as paranoia in the West, he said. 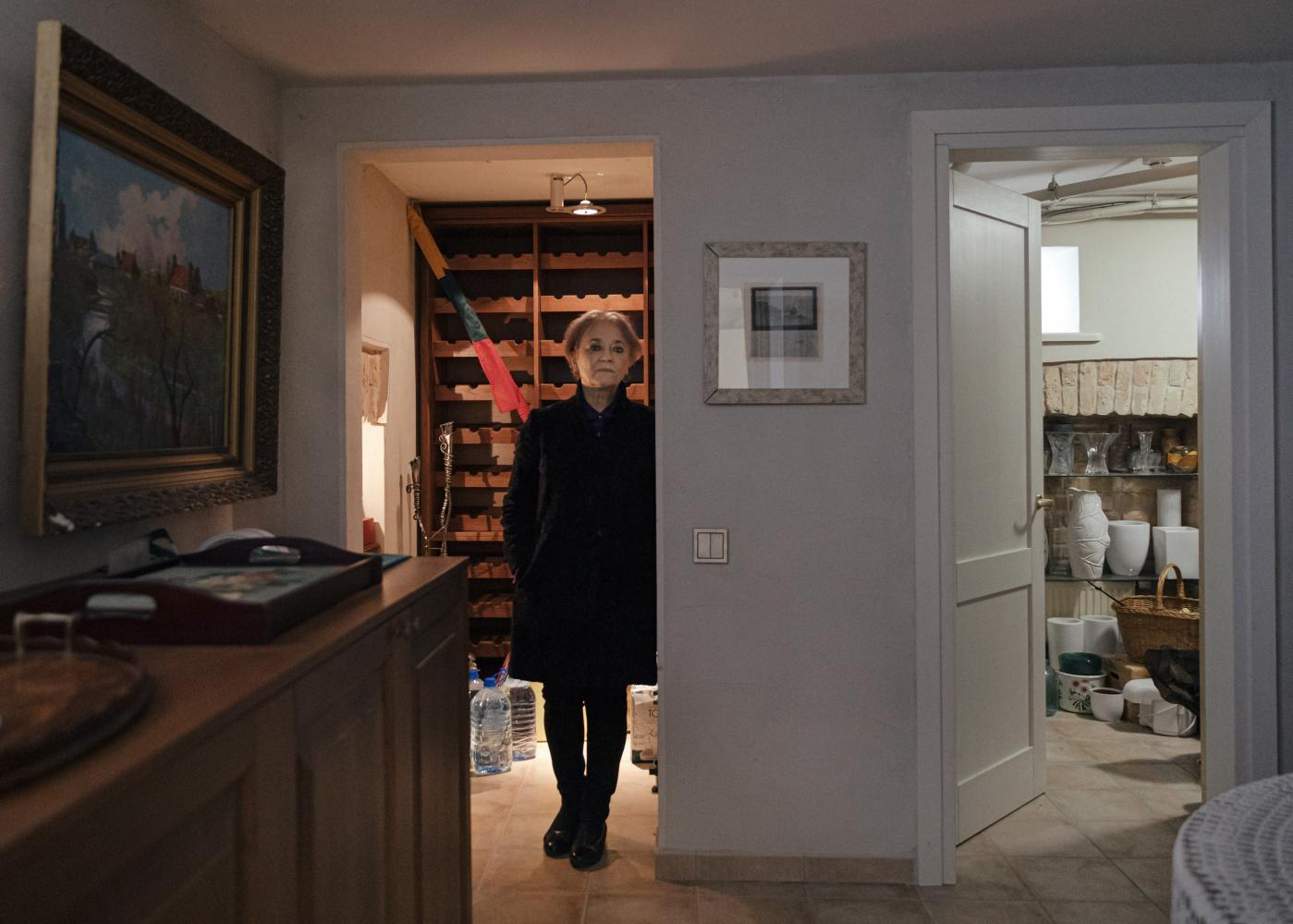 Alina Puriene, professor of dentistry, in the basement of her home in Vilnius, Lithuania. ANDRE MANTOVANI

“Thirty kilometers from here, democracy stops, and they understand that,” Colonel Nielsen said. “When Communism fell, this country looked to the West to learn things: about the rule of law, about how to build democratic institutions. Now is the time for us to learn from them .”

Why is link building important for your business? Find out here

As an entrepreneur, you know that success depends on various factors. A key factor is your ability to build strong links for your business website. There are many types of links you can create for your website. The most common types include backlinks, blog comments, directory listings, guest posts, and social media likes or shares. […]

If you are a social media user, you can rarely miss the witty posts of the Mumbai Police. The strength took to project themselves and to prove that they are friendly and accessible through their relevant messages. While the posts cover serious topics, the police team have been creative in keeping them engaging, educational, and […]

Scope of the DSL modem market by 2029

New Jersey, United States,- A market research report recently added to the repository of verified market reports is an in-depth analysis of the DSL modem market. Based on the historical growth analysis and current scenario of the DSL Modem Market, the report aims to provide actionable insights into the growth forecast of the global market. […]